#KumuKringle: Win prizes from Globe, Bench, Andok’s, and more through the app 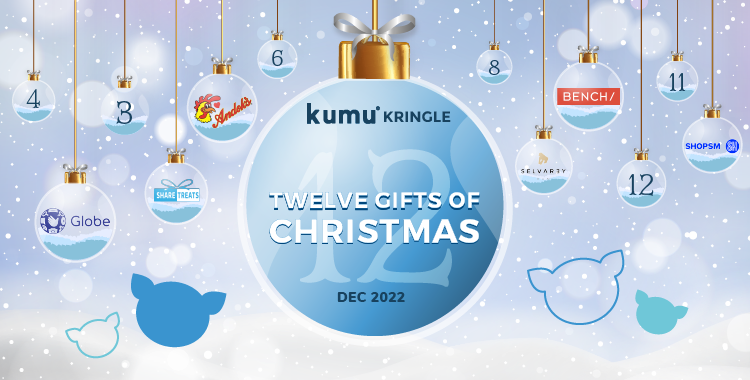 No matter how long the Philippines celebrates the holidays, the season never fails to truly hit its peak in December. Seeing that it’s impossible for social entertainment app Kumu to forget its roots, the kumunity is giving back in a way that befits the most wonderful time of the year. Enter Kumu Kringle: 12 Gifts of Christmas, Kumu’s first dip into a series of campaigns made to close out 2022—and ring in the New Year—in style, putting a digital spin on gift-giving for content creators. Over this flight of 12 campaigns (Kumunity Buzz), kumunizens new and old alike can win, and win big!

This season’s Kumu campaigns are made even more spectacular, thanks to participating partners like Globe, Bench, and Andok’s. From gift certificates to food to shopping experiences available to win throughout the overlapping campaigns, Kumu has you covered starting December 5 until the end of the month. Campaigns will be giving out the following prizes to multiple winners:

On top of their campaign, Globe Hapag Movement is also working with Kumu to hold a benefit concert streamed on the @kumunitystage channel on December 21, 7pm. The concert will feature homegrown Kumu talents, Globe Generation G contestants, and Kumunity Heroes. All diamonds raised will be donated to the Globe Hapag Movement with efforts to help alleviate hunger in the Philippines.

In between the campaigns, app users also stand to win a box of season-exclusive Kumu merch (December 15 to 19), a chance to support a charity of their choice (December 16 to 21), prizes to share with their own gifters (December 19 to 26), and a home appliance haul (December 20 to 25); balikbayans can win a round-trip flight from USA, Canada, or the Middle East to the Philippines, complete with hotel stay (December 24 to 30).

What is a Kumu campaign?

Campaigns are contests held within the Kumu app for all users; different prizes are up for grabs every time. The rules of a campaign are simple: Pick your desired campaign to join, then go live and stream on Kumu to earn as many virtual gifts for that particular campaign as possible. At the end of the campaign period, the streamers with the highest diamond count from the campaign’s virtual gifts win the top prizes.

Campaigns are not only your chance at winning once-in-a-lifetime experiences and unbelievable rewards, but also a great avenue for making new connections around the world. New to Kumu? They’re still excited to have you! Download the app now through the App Store or Google Play, and click on the Campaigns tab, or click here to learn more about campaigns, how to join them, and how to earn the coveted diamonds. Great things await you!