“LoveTeam Stream”: Be the third love team on the “Love At First Stream” movie

Things just got more exciting for movie fans and the whole Kumunity! Star Cinema, the Philippines’ biggest film production outfit, and kumu, the country’s leading social entertainment app and live streaming platform, collaborate for the upcoming Cathy Garcia-Molina film, ‘Love At First Stream.’ What’s more, two lucky Kumunizens have a shot at becoming the third love team in the movie. By joining the “LoveTeam Stream” kumu Campaign, one romantic duo will have their chance to be featured in “Love At First Stream”. That’s right, one Kumunizen pair will have a special guest appearance at the upcoming movie.

The power to decide rests in the Kumunity’s hands as the campaign officially opens, from July 16 to 26, 2021.

Top billed by today’s rising love teams such as KaoRhys—comprised of Kaori Oinuma and Rhys Miguel, and DanThony—comprised of Daniela Stranner and Anthony Jennings, ‘Love At First Stream’ is about the new normal, where life is wildly digital. The movie partnership is touted to be a first in Philippine cinema history, given the highly interactive digital projects alongside it, where audiences can participate and even decide the new talents to be featured. 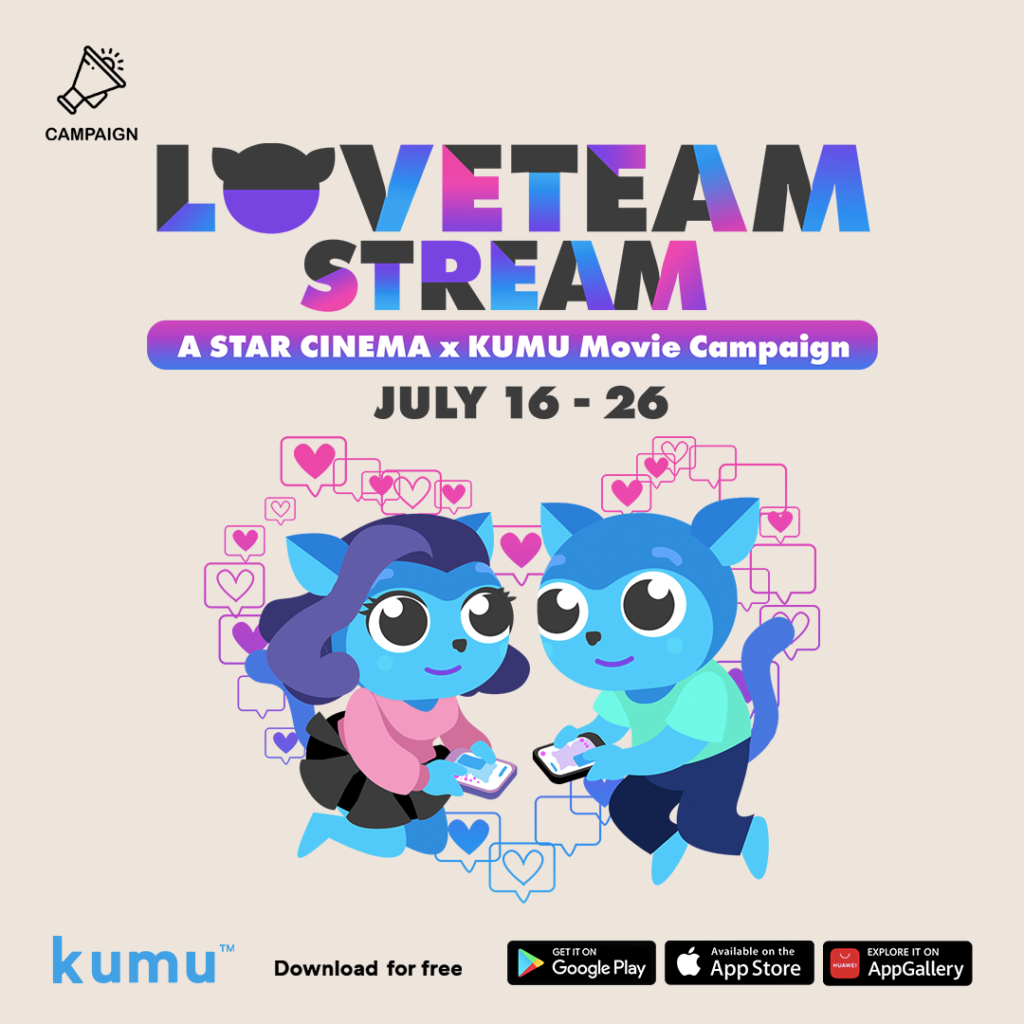 The “LoveTeam Stream” is the first interactive digital project for “Love At First Stream”. It is open to all kumu users 18+ years old and above, based in the Philippines.

As an official kumu Campaign, standard campaign mechanics apply, in which the streamers must collect the specific virtual gifts to build up their diamond value. Only the diamonds from the “LoveTeam Stream” virtual gifts will be counted in the leaderboard. At the end of the campaign period, the streamers with the highest diamond count win the tier prizes of the campaign.

However, there is a slight twist to this love team campaign. A love team duo must live stream together as an official pair, represented by one kumu account, or device. Only one representative account will be counted in the leaderboard; official winners must be a love team pair and kumu users. There is also a special consent form to be signed by the representative participant; this consent form is mandatory, and failure to sign will result in disqualification. Complete details of the “LoveTeam Stream” kumu Campaign can be found on the campaign’s official in-app page.

The exclusive “LoveTeam Stream” virtual gifts are “Chocolates”, “Cupid”, “Date” and “Love Team.” With them, the Kumunity can cast their choice for which love team they want to shoot to stardom. By sending virtual gifts to their love team of choice, the Kumunity not only shows their support for the pair, but also increases their chances of winning. By the end of the campaign period, the loveteam pair (represented by one kumu account) with the highest diamond value will be the third loveteam to be guest-featured in “Love At First Stream.”

Truly, the “LoveTeam Stream” is one of the most exciting kumu Campaigns to date! It is a real chance for kumu users and streamers to live their movie dreams. Because so long as you are with the Kumunity, we make dreams come true.

The “LoveTeam Stream” kumu Campaign is officially open from July 16 to 26, 2021. More details can be found in the campaign’s in-app page. Follow the official Star Cinema account (@starcinema) in the app to get more “Love At First Stream” content and updates. Also, be sure to subscribe to all our social media channels for all the latest updates. Follow @kumu.ph on Instagram, Facebook, and Twitter now. You can also check out the kumu blog for all the latest happenings in the Kumunity.