Who is the ‘Love Guro’? The “Actor Search” kumu Campaign is looking for another male cast-member for “Love At First Stream”

The new kumu Campaign “Actor Search” has gone live, as the Star Cinema x kumu movie ‘Love At First Stream’ continues its acquisition of new Kumunity talents for the movie. Running from August 10 to 19, 2021, the “Actor Search” is looking for another male cast member to join the acting troop of the upcoming Cathy Garcia-Molina film. The top tier winner of the campaign will be getting actual screen time on ‘Love At First Stream.’ 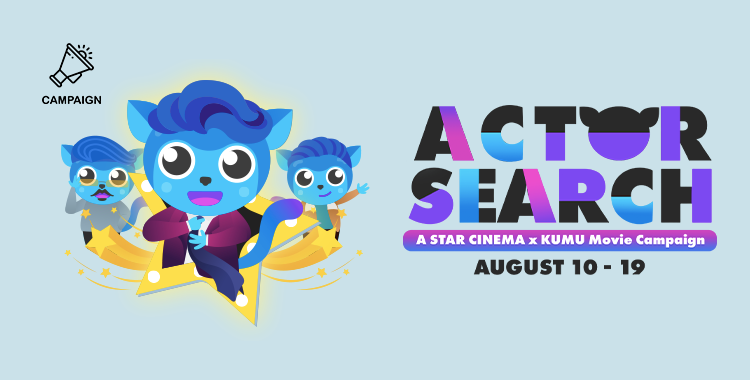 At the end of the campaign period, the streamers with the highest diamond count wins the tier prizes. It is also important to note that all interested contestants must sign the official Consent Form, located in the campaign’s “How To Join” tab.

For this campaign, the streamer who scores the highest diamond value wins the Tier 1 prize, to officially play the Love Guro character in ‘Love At First Stream.’ Tier 2 and Tier 3 winners, meanwhile,  will win some amazing products.

‘Love at First Stream’ stars today’s rising love teams such as KaoRhys—comprises of Kaori Oinuma and Rhys Miguel—and DanThony—comprises of Daniela Stranner and Anthony Jennings. It will revolve about the new normal, where life is wildly digital. A streamer, a student, a breadwinner and a heartthrob explore love, friendships online to escape their realities online.

The “Actor Search” campaign is the fifth kumu Campaign released in support of the “Love At First Stream” movie. A previous “Actress Search” campaign was met with much excitement, as PBB alum Quincy Villanueva, won the top tier prize, officially joining the movie as the character ‘Issa.’ Past campaign winners include PBB alums Amanda Zamora and Chico Alicaya—known as the ‘Chimanda’ love team, who will also make an appearance in the movie.

The “Actor Search“ kumu Campaign is officially open from August 10 to 94, 2021. More details can be found in the campaign’s in-app page. Follow the official Star Cinema account (@starcinema) in the app to get more “Love At First Stream” content and updates. Also, be sure to subscribe to all our social media channels for all the latest updates. Follow @kumu.ph on Instagram, Facebook, and Twitter now. You can also check out the kumu blog for all the latest happenings in the Kumunity.