Get ready, kumuzens! The hottest livestreaming awards are set to propel us from the tail-end of 2020, to the exciting new year of 2021! kumu is proud to present the first-ever kumu Livestreaming Awards as tribute to the vibrant Kumunity talents that put us on the global scene!

Keeping our vision to be a user and Kumunity-driven platform, the kumu Livestreaming Awards Committee is all ears for your opinion. The first phase of this awards, which is set from December 21 to 24, is an open call for nominations. Kumuzens, this is your chance to put forward your favorite livestreamer for the grand event! 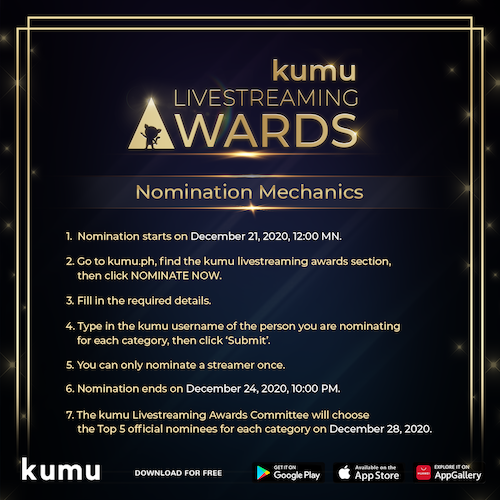 This year, the following categories and talents are open for nominations, which you can submit now.

Make sure to write down the kumu username of the streamer you wish to nominate. Results will be announced on December 28, 2020, and the next voting phase will commence! So hurry, hurry! Put those favorite streamer names to our kumu Livestreaming Awards nomination form now! We’re excited to see your input!

Check back here on the kumu blog for updates on all things Kumunity, tech, and start-up innovations. We keep things updated with @kumuph on Instagram, Facebook and Twitter. So stay tuned for more exciting news on the kumu Livestreaming Awards!