So You Want to Be a Billboard Star? There Are Four Days Left For Your Chance! 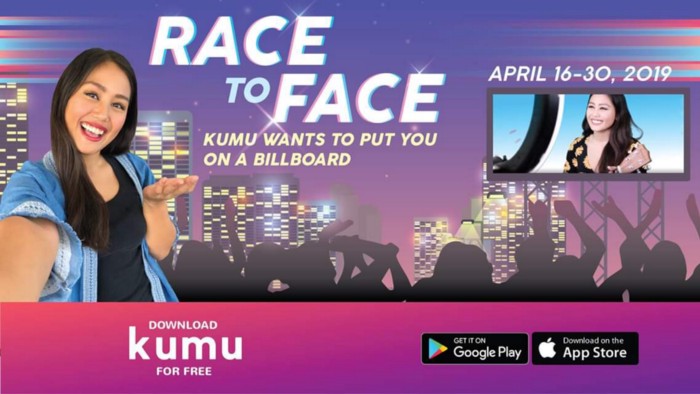 Admit it or not, almost everyone has daydreamed about having their face plastered on a huge billboard along EDSA, where thousands of cars and pedestrians pass by every day. Commonly, we only see the brightest of stars from film and television endorsing their product on these billboards, and it usually, immediately slaps us back to consciousness. But not anymore, because content platform and livestreaming app Kumu wants to make that dream a reality!

Kumu just rolled out their new promotion, the Race to Face campaign, where the top diamond earner gets to have their persona displayed on billboards across the metro. Just stream your own original content, receive virtual gifts from your followers (which you can actually convert into cash), race to the top – et voila! – you’ll have your face on a billboard, no auditions required! In addition to this solo ad exposure in the metro, the grand winner will also receive P20,000 in cash. Not bad eh?

The “Race to Face” campaign was created out of Kumu’s desire to encourage their subscribers to make personalized, highly creative content. The app is accomplishing this handedly. Not only are the content creators consistent in going on-cam and livestreaming their activities – they are also putting great effort into personalizing content and enriching their material.

An example of this is Miles Fajardo (@milesyboop), who is more commonly known in the app as Doc Miles. This doctor and public health researcher streams content ranging from fashion and beauty to health and wellness to tarot card reading (yes, she does that for lucky audience members!). This variety of content keeps her fans engaged and hooked to her show.

There’s also gamer-livestreamer Suzzysaur, who just recently joined Kumu. Well-known for pioneering video game livestreaming, Suzzysaur brought her content to the social TV network to reach a unique audience. As it turns out, some of her long-time gaming fans happen to be Kumu subscribers as well!

As for the Race to Face campaign? Who knows what quirky antics the content creators will do as part of their bid to get to the top spots. If you think you can make great content on a livestreaming platform, you might just be the next face we would see on a billboard!