Nadine Lustre Gets Real with Angie Mead-King on kumu

Nadine Lustre & Angie Mead-King share their experiences on losing their identity, their journey towards self-love, and how much better they have been ever since their rebirth.

Manila, PH – In the first of a four-part video podcast series streamed on kumu, Nadine invites Angie for a casual discussion on topics that revolve around losing and finding oneself – a nod to one of the themes of Nadine’s freshly dropped album Wildest Dreams.

No subject matter seemed to faze the two queens as the podcast’s host Debbie Then threw questions at them alternatively, which the two ladies answered with unconcealed honesty. 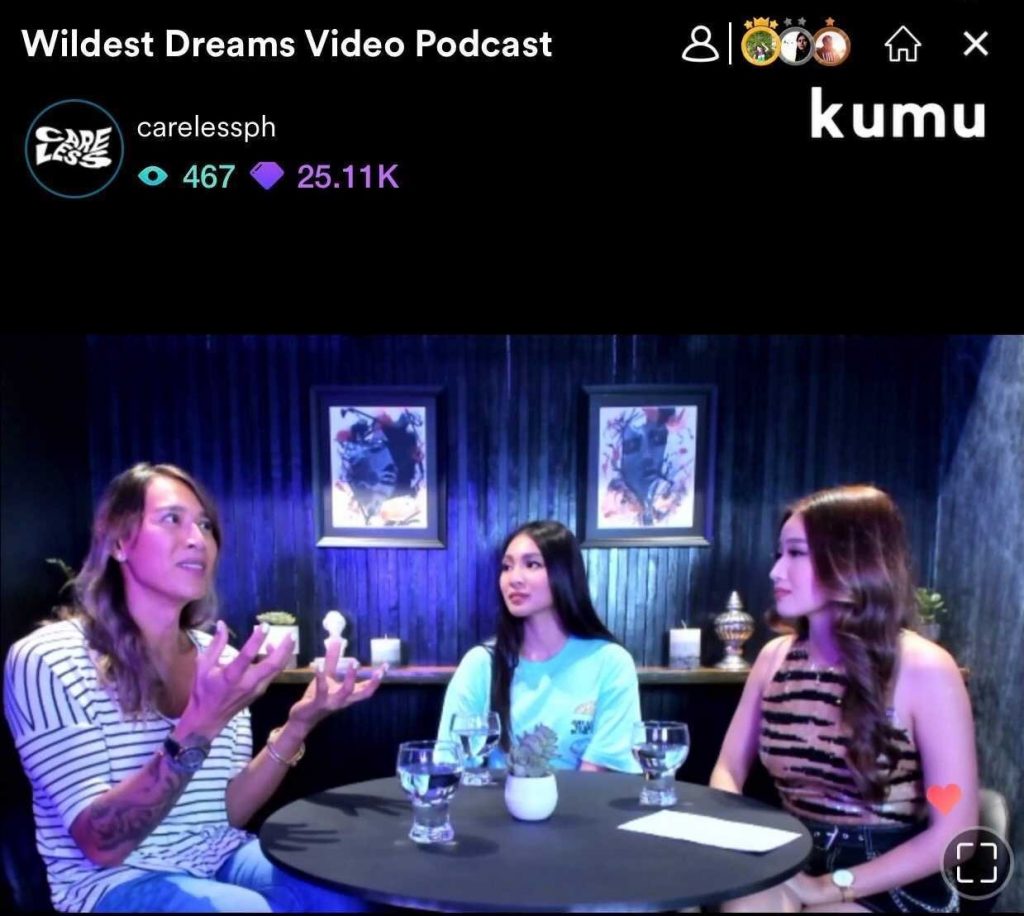 The conversation begins smoothly with Debbie asking the ladies what they feel about the word change and their life before they found the resolve to transform it.

Nadine opens up about the many struggles she has gone through from the beginning of her career up to the point of conceptualizing her album. Many of these challenges were brought about by self-doubt, embodying the character that others say she should have, and finding acceptance from all the wrong places. She shares that years of stress and pressure from these matters made her lose sight of her true self.

On the other hand, Angie struggled to find the courage to come out and show the world who she really is. She was anxious about how the general public would take the news, considering the conservative background of the country. This worry only prolonged the process of coming out, even taking a couple of years to gradually reveal her true self to her inner circle of family and friends before she did to the public.

However, they both acknowledge that these hardships were essential in forming the person they are now. They agreed that what is important is that there was a point wherein they realized things had to change for the better.

Angie’s wake-up call was when her father passed away. She recounts that this made her realize how fleeting human life could be and how she would only waste it if she would continue living but was hiding her true self in fear of what others may say.

For Nadine, she used the time in this pandemic’s lockdown to look deep within her and rediscover the side that other people pressured her to bury. She shares that she had conversations with herself to become aware of who she is and what her heart truly yearns for.

While these two journeys may be contrasting in the details, Nadine and Angie easily related to each other because of the similarities in how they eventually found themselves and became better off for it in the end.

Angie took the emotional pain of her father’s death to forge a fire within her that gave her courage. Now she proudly affirms that she can live her life to the fullest and do whatever makes her happy. Fascinatingly, she recalls that almost all of the stories about her coming out were positive. She was relieved to find out that it wasn’t as bad as she expected it to be. Ultimately, she was thankful to everyone who showed their love and support for her and her wife, Joey.

And for Nadine, her realizations led her to actualize Wildest Dreams. Not only was the album an outlet to pour out her feelings, but it also became a physical manifestation of her growth as a person. She expressed how happy she was that she found the strength to let go of all the insecurities she had about the album (which was a lot) and released it along with visuals. The album speaks something never before heard from her – something her heart has been yearning to voice out all these years. It’s Nadine at her most authentic form.