The interactivity of sports has been taken up a notch with technology powered by the only Filipino social TV network — Kumu, in partnership with the Premier Volleyball League (PVL).

Over 6,000 volleyball fans nationwide enjoyed more than just the regular TV viewing of the much-awaited PVL last Sunday, May 26. Alongside the action on their TV screens, fans got to enjoy a more immersive experience with Kumu’s watch party on its content platform, featuring games hosted by Chef Kia del Rosario and Kumu’s Vice President of Marketing KC Montero.

This one-of-a-kind sports viewing experience is a monumental feat for Philippine media. Not only has a major sporting event been broadcasted in traditional, terrestrial television, but it also has been incorporated into digital livestream for the first time ever — a convergence of two mediums for maximum sports entertainment and interactivity. Indeed, there are more ways we could expect digital livestreaming to revolutionize the way we view our favorite contents in the near future.

Let’s take a look at how Kumu and the Premier Volleyball League teamed up to give fans a whole new sports viewing experience:

The watch party screen switched to a bingo board as the volleyball match started. In order to win the bingo game, viewers had to tune in closely to the PetroGazz vs. Creamline match and watch out for certain in-game scenarios to block out on their bingo boards. These scenarios include 5 attack points from Creamline team captain Alyssa Valdez, 3 PetroGazz Service Aces, pancake by Melissa Gohing, and a quick hit point by Jessey de Leon, among others. 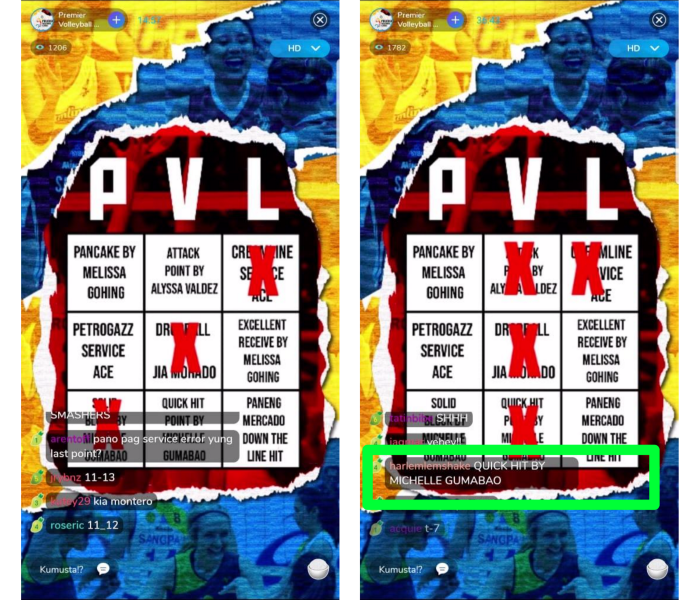 Naturally, the comment section became a riot as fans of the opposing teams flooded the chatbox with their enthusiastic banter. At first, Creamline Cool Smashers was the talk of the town, but PetroGazz Angels eventually won the hearts of many fans as their import and open spiker Janisa Johnson flexed her skills during the match.

Even KC and Chef Kia rooted for their own team — KC cheered for the PetroGazz Angels while Chef Kia wanted Creamline Cool Smashers to win. While KC had been actively cheering for PetroGazz, he did not actually know much about volleyball. So the fans united to help KC learn some of the terminologies of the sport through Kumu’s comment section that allows for seamless, real-time interaction. 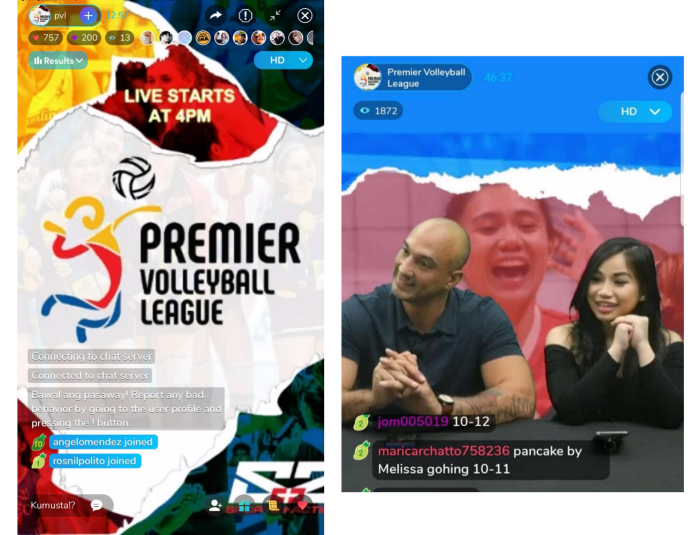 For the post-game show, the hosts recapped the match with a quiz show where they asked viewers five questions about the events that transpired during the volleyball match. Kumu gave away P30,000 in total during the two-hour stream, while having connected some 6,000 volleyball enthusiasts all over the Philippines.

It is indeed a good time to see what the livestreaming industry holds for us in the future. The technology is here, and only our imagination can limit us.