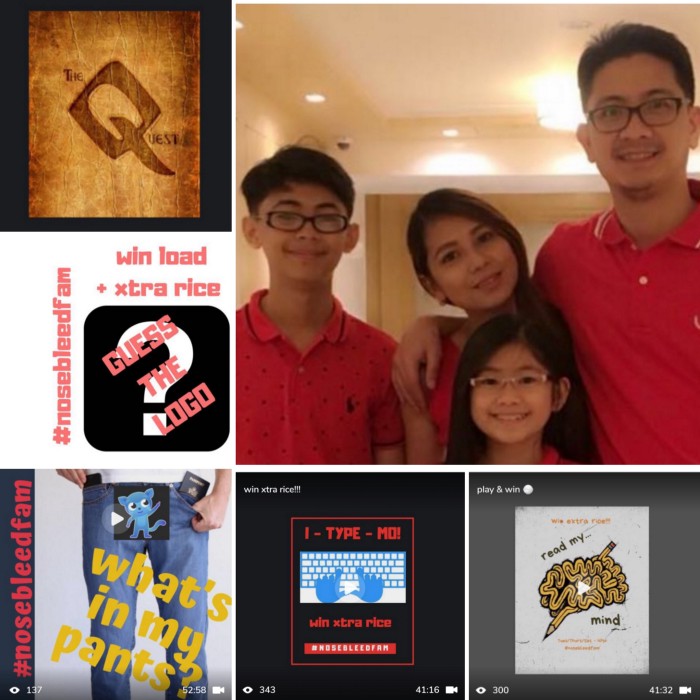 Ever wonder what families do when they get bored out of their minds? There’s the usual movie marathon and game nights, of course, but this awesome family took game night to a whole new level with livestreaming app Kumu.

Andang and Chester, together with their kids Ethan and Shai, have been streaming their quirky trivia games on Kumu since 2018. Collectively, they are known as the NosebleedFam, a label they have been so fondly called by their fans in the Kumunity. The name might have been derived from a Filipino joke about nosebleeding caused by the English language, the language Andang’s family commonly uses for any and all of their conversations.

The NosebleedFam regularly streams their homemade game shows like Read My Mind, What’s In My Pants, Guess The Logo, and their most popular (and also quite difficult) trivia game – The Quest. The real-time engagement enabled by the Kumu technology provides thrill and excitement to the games shows, as if the audience is just right there with the foursome.

“We just thought it would be fun to livestream our daily interactions with each other at home, and never thought we would be accepted by the rest of the Kumu community,” says Andang, the beauty vlogger and matriarch of the family. What started out as a simple family tradition for them became a live show that everybody in the community enjoys.

The only challenge, however, is to keep each NosebleedFam member engaged in the livestreaming. “Sometimes not every member in the family is always in the right mood to be in front of the camera. As a work-around, we have assigned every member of the family certain tasks for the show. Ex: I will host, Chester will create some content and/or maybe questions, Shai loves to talk to people, Ethan helps out with setting up the home studio and the likes, and my cousin Carlo helps out with the technical side,” Andang says. And that, folks, is how the NosebleedFam consistently delivers their homemade game shows to their fans.

The Quest, their flagship livestream segment on Kumu, is not your ordinary trivia game. The NosebleedFam adds a little pizzazz to it, which makes the questions trickier and tougher to answer – so tough, in fact, that they allow using Google search to make it less daunting to the participants.

Are you curious as to what types of questions they ask on The Quest? Here’s an example taken from one of their recent streams: “This famous actress has a roman numeral tattoo on her forearm as a tribute to this former British Prime Minister. What was the famous phrase that he said in his speech?” See? Their questions are clever! The answer to this is a quote by Winston Churchill, “I have nothing to offer but blood, toil, tears, and sweat,” in his speech addressed to the House of Commons. The actress with the tattoo? That’s Angelina Jolie.

The Kumu community – or Kumunity, for short – was quick to welcome the NosebleedFam on the app. “When we went live a couple of months ago, we received so many questions about us, like who we are, what do we do over the weekends, etc,” says Andang. The whole family is a joy to watch, particularly Shai, who is definitely not-so-shy talking to fans. Andang recalls their very first livestream: it was a makeup tutorial with her daughter. Andang had to step out for a bit, so Shai was left in front of the camera. To her mom’s surprise, she kept engaging the viewers by answering their questions and demonstrating to them her unique talent – making water drop sounds.

“It was actually amazing to know that Kumu is a safe platform wherein kids are free from inappropriate behavior and bullying from the viewers,” Andang says about the app, adding that this feeling of security and the sense of community in Kumu drive their family to keep creating shows that everyone can enjoy. “Kumu has also helped us bond more as a family and to overcome certain fears of ours, like talking to large groups of people virtually. We also loved the fact that it’s a place where anyone can just be themselves, have fun, play games, and is family oriented,” Andang said.