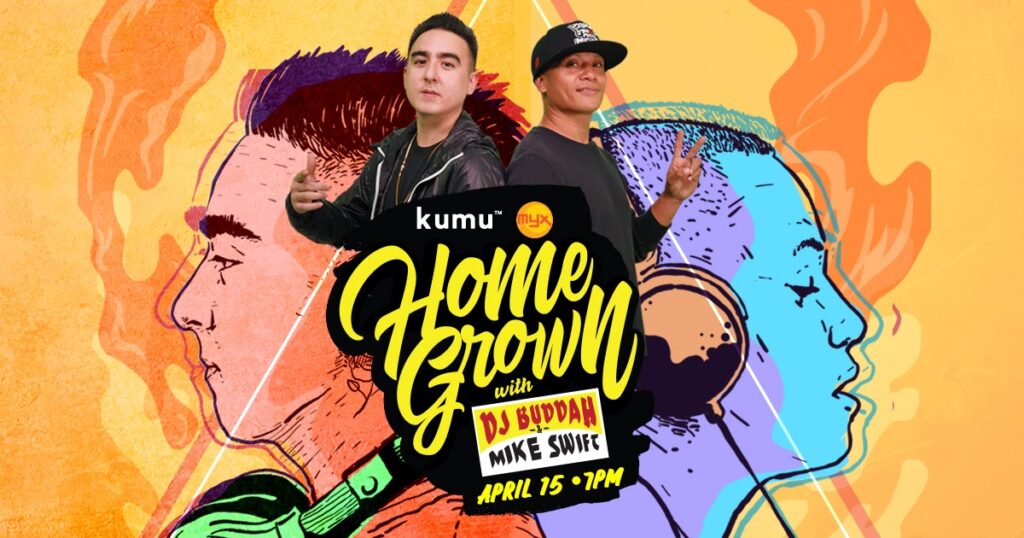 DJ Buddah and Mike Swift, two of the most influential artists in the country’s hip-hop scene, drop a beat and take us on a wild lyrical ride with Homegrown. Season 1 is set to launch on kumu by April 15 at @myxph, with regular livestreams every Thursday, 7pm. Additionally, starting May 5, Homegrown will also air on TV every Wednesday on the Myx Channel, 8pm.

Presented by kumu and Myx, Homegrown features widely talented rappers and rising hip hop artists who are making noise in the Pinoy music scene. Aside from discovering the lyrical genius and artistry of these talents, Homegrown also dives into OPM street culture and style.

kumu has definitely opened up a new stage for OPM artists to be discovered. With DJ Buddah and Mike Swift at the helm, the Kumunity is sure to get deeper into the dynamic, diverse global OPM music scene.

Mike Swift, an artist born in the Philippines and raised in Brooklyn, New York, shares, “In kumu, I feel so comfortable here. It feels like the perfect place to spread gospel.” Indeed, kumu’s Homegrown aims to be an exciting congregation of amazing performers from the Hip-Hop scene.

“The thing about kumu that excites me is the great potential to grow with them, and the magic it brings,” continues Swift. “Just today, I was able to meet someone who is not Filipino, and who is a producer in Yonkers, NYC. Through kumu, I now have a connection to work with, once I land there in April. I’m excited to discover new acts; I’m excited to showcase what the current Pinoy Hip-Hop scene has to offer,” he shares.

DJ Buddah, a music prodigy who’s part of the local hip hop collective Bawal Clan, believes deeply in the power of kumu, especially how it’s opening up new doors for the Filipino artist. Having joined on May 15, 2020, DJ Buddah shares, “Not only is the app super fun, but it gives you the opportunity to meet Filipinos around. You can also earn through virtual gifts. It’s a beautiful Kumunity, full of positivity.”

The music industry is highly competitive, sometimes, even cutthroat. But in Homegrown, artists can expect only love and support from the kumu bubble. On the livestream show, DJ Buddah and Mike will be connecting with like-minded creatives,  building a wider network with artists who will be tuning in from all around the world. It’s a “world tour” brought straight to your app! Get ready for authentic, original content from your favorite rappers, dancers, DJs, graffiti artists, and street designers. In addition, Homegrown is opening up a space for new artists to be featured. Listen to them on the special segment, “Homegrown Hype,” which will launch halfway through during the season.

“We are excited to spread the OPM Hip-Hop culture and lifestyle to Filipino fans around the world. It is about time everyone finds out how strong the hip-hop movement is,” DJ Buddah ends.

Be there for the Homegrown Season 1 launch with DJ Buddah and Mike Swift, starting April 15 at @myxph on kumu, 7PM. Don’t forget to tune in!

Don’t have the kumu app yet? It’s easy! Download the app at Google Play or the App Store, and join the Kumunity!