MANILA — Philippine indie darlings IV of Spades are showing no signs of slowing down as the trio takes their brand of OPM pop-funk online this March 19, 10PM as Red Bull presents the first-ever live stream concert via social media app KUMU. 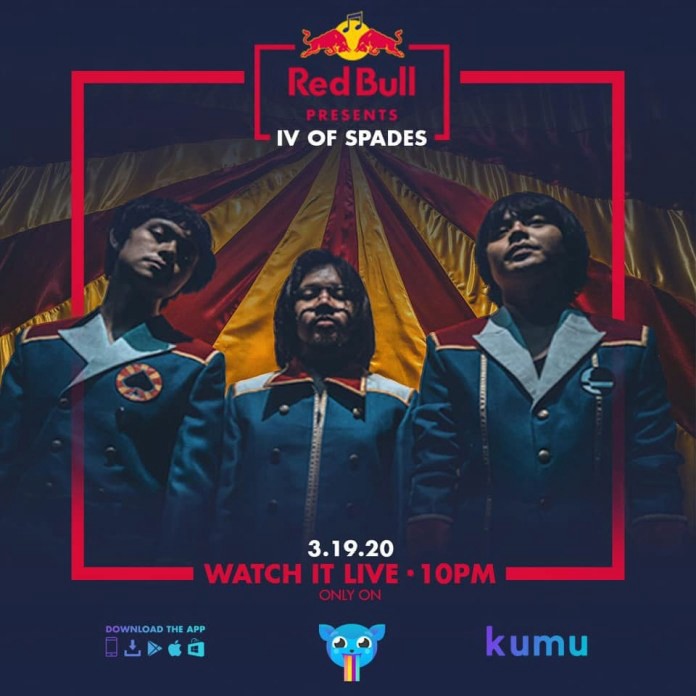 IV of Spades has been making the rounds of the local and international music circuit since they formed in 2014 and released their quintessential hit “Mundo” in 2018. Soon the band gained a significant following both locally and abroad and was nominated for the Best Southeast Asian Act in the 2018 MTV Europe Music Awards.

Thanks to KUMU, music fans can now catch IV of Spades in the comforts of their own home through the magic of live streaming. And if you haven’t seen the boys lately in their blue suits with red, white, and gold accents as seen in their latest “Ang Pinagmulan” music video, then watching the concert is probably the best time to check back in IVOS’s world, with new materials set to be released via their upcoming second album.

Recognizing the power of OPM artists to influence social media users, Kumu together with Red Bull brings another in-app first by bringing the concert stage to your mobile screens. What’s best is that fans can post comments and interact as the concert happens.

To catch IV of Spades live on KUMU, visit win.gs/redbullspades, register your mobile phone numbers, and download the KUMU app.