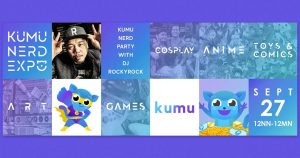 MANILA, PHILIPPINES – The country’s fastest-growing social media app kumu has effectively given birth to various Pinoy-centric communities who share different interests under the sun. And just like how it is worldwide, there will always be the ‘nerds’ and ‘geeks’ who heat things up in reality and online for the best cosplays, amazing collectibles, and exciting news throughout the fan sphere.

For the many Filipino nerds out there like top art streamer and cosplayer Sely Kyle and her co-enthusiasts, the social media app is the perfect platform to launch the first-ever KUMU NERD EXPO slated on September 27, Sunday starting at 12 noon to 12 midnight.

Origin Story
Since the term ‘nerd’ has taken on a new form in today’s digital age in the person of influencers and erudites of pop culture rather than what boomers used to think of from the film Revenge of the Nerds, more enthusiasts are now getting into conventions like San Diego’s annual Comic Con or Los Angeles’s Wonder Con.

Thanks to kumu and the many die hard nerds out there, now there’s one to look forward to right here at home (both in the country and literally), despite the COVID-19 quagmire.

“The inspiration came from the Nerd Kumunity,” said Sely who live streams via the app. “Angelo Mendez approached me during one of my interviews with one of the top cosplayers of the Philippines and the stream attracted a lot of viewers and became the top stream on the feed,” she added while also sharing how more Pinoy nerds have been expressing their dismay about missing conventions due to the pandemic.

Though smaller in scale (at least for now), the first KUMU NERD EXPO is looking to grow its strength in numbers over the years after the social media platform gives all the nerds out there a chance to showcase what they really have to offer their community.

“A lot of the work will come from the streamers. For expectations, I think it will help the Nerd Kumunity to engage and share their common interests, express themselves, and support one another by attending the activities within the event,” shared Sely.

And there’s absolutely no lack of pop culture easter eggs for nerds to find during the e-event. With six individual networks featuring various categories, the first KUMU NERD EXPO is practically a Coachella for true blue Pinoy geeks. 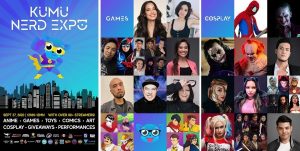 The NERD EXPO Alliance
Stereotypical nerds better polish their glasses for the most amazing sights happening during the expo. There will be a smorgasbord of performances, online parties, community discussions, and awesome prizes up for grabs all throughout. Fellow nerd celebrities including theater actor Bibo Reyes (@biboreyes) and cosplay genius Prince De Guzman (@princedeguzman) have already signed up to grace the online convention, plus a roster of other fantastic performers headlined by DJ Rocky Rock (@djrockyrock) with his ultimate nerd playlists.

The KUMU NERD EXPO will actually be similar to a school fair where a main channel is devoted to awarding winners, giveaways, announcements, and the main party while a variety of interesting booths are also available all around.

The five other KUMU networks for the event will feature anime personalities including top dubbers in the industry; the latest in gaming including reviews of fresh releases and RPG games; toys and comic collections from noteworthy enthusiasts, art sessions with tips from the top contemporary artists in the country; and everyone’s favorite– the cosplay network plus makeup, voice acting, and prosthetic tutorials. Needless to say, this expo is one wherein you’ll gladly wear a mask especially these days! 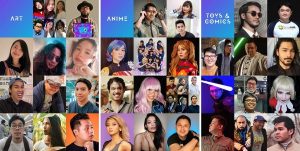 The NERD EXPO Universe
“Each stream will be hosted by different streamers from the Kumunity. We wanted the event to be Kumunity-based by asking other streamers from the platform to help people interact with each other more and discover more existing streamers within the app,” shared Sely. And as if that’s not enough for both nerds and live streamers to be excited about, more giveaways including lego sets, shirts, and other exclusive merch will be handed out to lucky winners during the e-event.

Similar to how things are in the comicverse, we are called to follow what we find good. With kumu giving the green light for the NERD EXPO’s test run this year, it’s probably safe to assume that we can look forward to more sequels to the exciting online assembly soon.

“The possibilities are endless! We will be looking for bigger events with kumu in the future”, concluded Sely like a true superhero to our inner nerds.

Learn more about the first KUMU NERD EXPO via the app!
kumu is a powerful social media platform that brings the voices of Filipinos from all over the globe at the forefront. Aside from presenting users real-time earning opportunities as a live streamer, chances to win cash in various game shows, and engagement in campaigns, kumu also fosters communities that ignite relevant discussions among Filipinos.