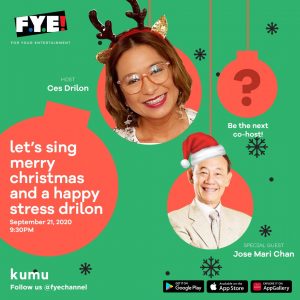 MANILA – Ces Drilon will be spreading Christmas cheer in the Monday episode of her new program “Bawal Ma-Stress Drilon.”

Airing at the FYE Channel on Kumu on September 21 at 9:30 pm, Drilon’s guest for the night is singer-songwriter Jose Mari Chan.

Chan is known as an icon of Filipino Christmas celebrations, with his songs playing at various households and establishments when the “Ber” months arrive.

In a previous interview on a radio station, Chan said he feels blessed that many people have associated him with the most joyful season of the year, especially in the Philippines.

While the Chans consider December as the start of the Christmas season, the OPM icon said that he does not mind when people start playing his Christmas songs as early as September “because it expresses anticipation for a wonderful season.”

For this particular “Bawal Ma-Stress Drilon” episode, Kumu viewers will be given the chance to be part of the conversation with Drilon and Chan through the “Let’s Sing Merry Christmas and A Happy Stress Drilon” campaign.

They only had to start a public live stream until 11:59 a.m. of September 18 and ask their viewers for a “Stress Drilon” virtual gift.

“Bawal Ma-Stress Drilon” is one of the hit digital shows streamed live on Kumu, where the veteran broadcast journalist enjoys fun and memorable chats with guests.

Among those who were already featured on the show were Manila Mayor Isko Moreno, Maymay Entrata and Gardo Versoza.