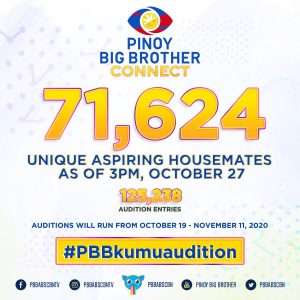 Hundreds of Filipinos may be experiencing a little cabin fever after being holed up in their homes for more than a few months, due to the pandemic. But with the opening of the new season of Pinoy Big Brother (PBB) and the PBB house, thousands are feeling excited, and are willing to take their chance to spend a few more weeks in a new “home” with 11 other strangers.

For the ninth season, Pinoy Big Brother: Connect, PBB opens its virtual doors to aspiring housemates with kumu as the official and exclusive partner for the audition.

To join, participants must download the kumu app and submit a kumu klip introducing themselves using the hashtag #PBBkumuAudition. Sky’s the limit to their creativity as kumu’s klip feature allows participants to personalize their video submissions, from the music used to their backgrounds, filters, text, emojis, and so much more!

Excitingly, as of October 27, almost 72,000 Filipinos submitted their videos on kumu.

Angelo Mendez, Head of Programming for kumu, shares, “It is so cool, given the current pandemic, that kumu and the PBB team were able to come up with solutions so that people could audition safely. Never in our wildest dreams had we thought that we would receive this many audition tapes from Filipinos around the world.”

“We are overwhelmed by the response to the #PBBkumuAudition,” adds Director Laurenti Dyogi, better known as  ‘Direk Lauren’, Head of Entertainment Production for ABS-CBN. “It’s a challenging search for the 12 housemates. This is really like finding a needle in a haystack.” The PBB series, which was launched in 2005, is responsible for discovering some of this generation’s biggest stars, such as Kim Chiu, Sam Milby, Gerald Anderson, James Reid, Maymay Entrata, Kisses Delavin, and Edward Barber, among many others.

“To all those who have sent and will be sending their auditions videos on kumu, we thank you as it is always a delight to listen to your stories and witness all your talents,” adds Direk Lauren.

The PBB audition will run until November 11, 2020. To join, download the kumu app, and subscribe to @pbbabscbn. Stay tuned for more updates. Those who make the cut will be contacted through PBB’s official kumu account.

kumu is a powerful social media platform that brings the voices of Filipinos from all over the globe to the forefront. Aside from presenting users real-time earning opportunities as a live streamer, chances to win cash in various game shows, and engagement in campaigns, kumu also fosters communities that ignite relevant discussions among Filipinos.